Features and Benefits of Chamomile

Written by EverEscents on April 26, 2015. Posted in Healthy Lifestyle.

Chamomile plants are native in many countries throughout Europe, and are cultivated in such countries as Germany, Egypt, France, Spain, Italy, Morocco, and parts of Eastern Europe. The various different Chamomile plants are very distinct and require their own set of conditions to grow. For example, Roman chamomile is a perennial plant (meaning it will live more than two years). It grows close to the ground and has smallish blossoming flowers. It tends to be bitter when used in teas. German chamomile, on the other hand, is a sweeter variety. It is an annual plant and can grow large blossoms up to three feet in height.

The plant’s healing properties come from its daisy-like flowers, which contain volatile oils (including bisabolol, bisabolol oxides A and B, and matricin) as well as flavonoids (particularly a compound called apinegin) and other therapeutic substances.

Chamomile has been used for centuries in teas as a mild, relaxing sleep aid, treatment for fevers, colds, stomach ailments, and as an anti-inflammatory, to name only a few therapeutic uses. Chamomile may be used internally or externally. Extensive scientific research over the past 20 years has confirmed many of the traditional uses for the plant and established pharmacological mechanisms for the plant’s therapeutic activity, including antiseptic, antispasmodic, antipyretic, antibacterial, antifungal, and anti-allergenic activity.

Recent and on-going research has identified chamomile’s specific anti-inflammatory, anti-bacterial, muscle relaxant, antispasmodic, anti-allergenic and sedative properties, validating its long-held reputation. This attention appears to have increased the popularity of the herb and nowadays Chamomile is included as a drug in the pharmacopoeia of 26 countries. 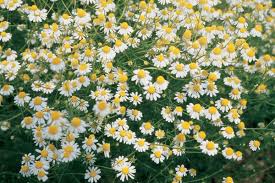 Chamomile oil is an essential oil extracted from the chamomile flower.

The oil serves many medicinal purposes, but one of the best-documented uses is for relaxation. The oil has a calming effect on people, and can be used to help induce sleep, ease frayed nerves, and promote a general sense of calmness and wellbeing. It is great for those with nervousness or anxiety problems. Aside from having mental calming properties, chamomile is also good at relaxing sore muscles and tight joints. It can ease menstrual cramps and back aches, as well as relax the digestive system to ease upset stomach or indigestion issues. When applied topically to the skin, it soothes redness and irritation. For this reason, it is a common ingredient in skincare. It also eliminates itchiness and is good for those with allergic reactions. Sometimes chamomile is used on rashes. Because of its anti-inflammatory properties, it can work to take down swelling caused by rashes or skin irritants.

Finally, the oil has antibacterial properties and can help to clean and protect wounds from infections. It is commonly used as an all-natural remedy for dental abscesses, conjunctivitis, and other infections.

There are a wide variety of ways in which chamomile essential oil can be ingested or applied on the body, depending on the reason the product is being used. For example, the oil can either be applied topically—when dealing with skin problems, or ingested orally—for upset stomach or other gastrointestinal issues. To ingest the oil, it should be diluted into water, as only a small amount is highly potent. One to two drops in a glass of water should be sufficient for using as a mouthwash or ingesting for stomach problems. To use in a bath as an aromatherapy agent and muscle relaxant, less than 10 drops should still be sufficient.

In addition to medicinal use, chamomile enjoys wide usage, especially in Europe and the U.S., as a refreshing beverage tea and as an ingredient in numerous cosmetic and external preparations. Rob McCaleb, President of the Herb Research Foundation in Boulder, Colorado estimates that over one million cups of Chamomile tea are ingested worldwide each day, making it probably the most widely consumed herbal tea.

EverEscents use Lemongrass is a number of our products and not only is the aroma beautiful, we enjoy using this ingredient for its wonderful features and benefits as mentioned above.